Edwin “Steadi Eddy” Cabrera is a Lynn-based filmmaker and co-founder of Grind House Recordings, a media company focused on promoting local hip-hop music. Edwin’s passion lies in promoting independent music and uplifting the hip-hop culture in Lynn. He primarily does this through The Grind House Podcast, which highlights talented hip-hop artists, along with his work with the Lynn Hip Hop Wall of Fame, a mural that commemorates and helps preserve Lynn hip-hop culture. His work in the community can also be felt at Raw Art Works, where Edwin served as the Production Coordinator and Instructor at the Real to Reel Film School, a program he also graduated from in 2009. Edwin received his B.A. in Communications with a certificate in Film Studies from the University of Massachusetts Amherst in 2013. 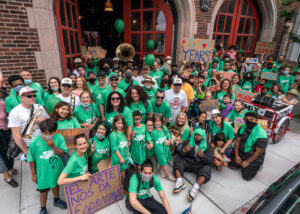