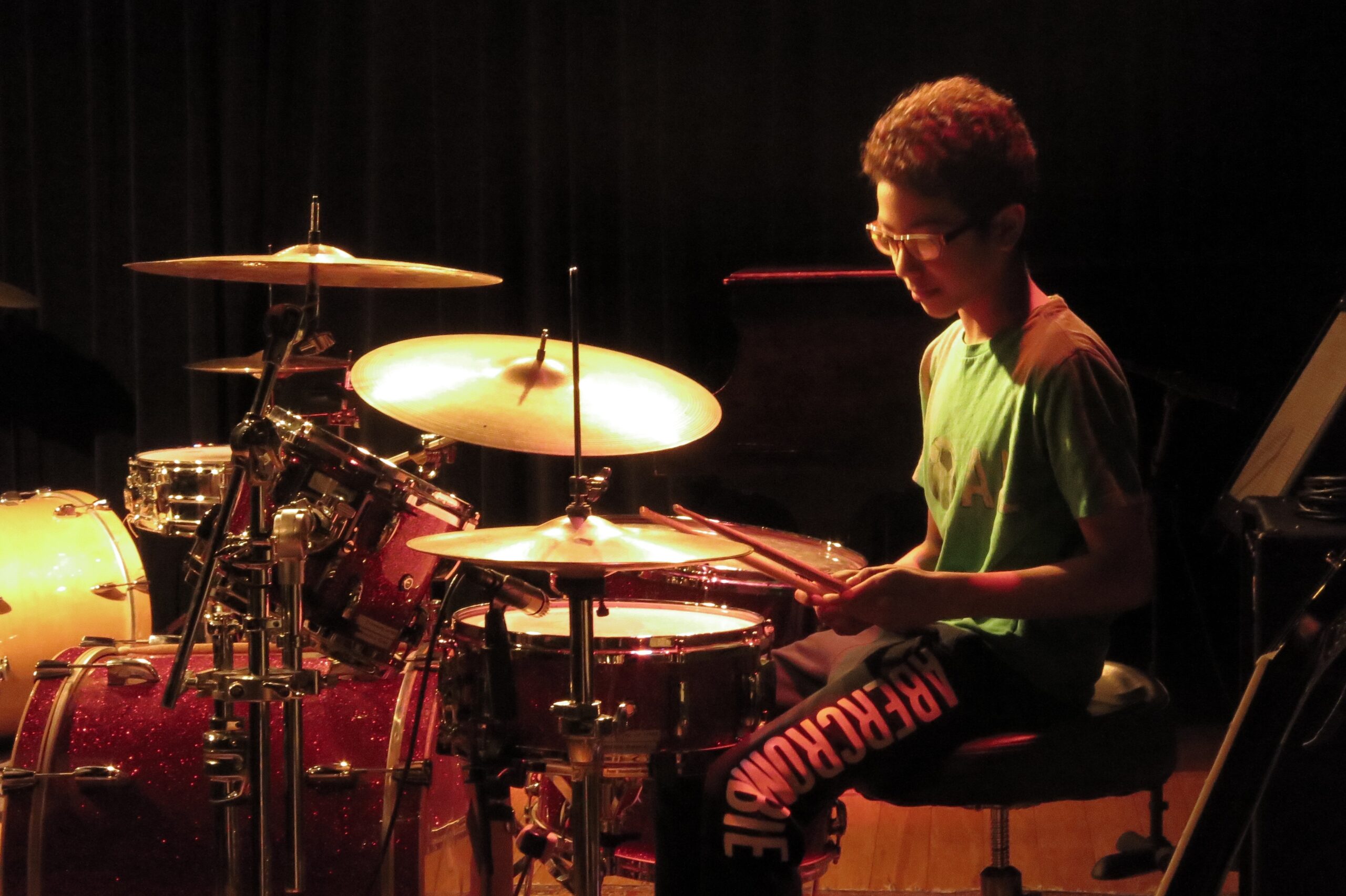 ZUMIX is an East Boston-based nonprofit organization dedicated to building our community through music and creative technology. We believe music is the most powerful means of developing adolescent self-identity. Our award-winning music and creative technology programming is designed to equip youth with the tools necessary to reach their full potential, while creating a safe space for youth to explore who they are and who they want to be. Through community events, ZUMIX also provides access to top-quality arts experiences for a low-income, historically underserved neighborhood.

Co-founders Bob Grove and current executive director Madeleine Steczynski founded ZUMIX in 1991 as a response to Boston’s worst wave of youth violence.  ZUMIX began as a summer songwriting program with 24 youth, $200, and the simple idea that giving youth something to be passionate about could transform lives and elevate communities.

Today ZUMIX serves more than 500 youth per year through after-school and summer programming and an additional 500 through in-school partnerships. More than 10,000 additional adults, children, and families attend our community events and festivals.

For almost 30 years, the Engine Company 40 Firehouse sat vacant on the corner of Sumner and Orleans Streets in East Boston. The exterior façade was prominent, but the interior rooms were run down. In 2004, the City of Boston decided to sell the Firehouse and awarded the building to ZUMIX in 2005.  We closed on the Firehouse in December of 2008, and began construction in 2009.

The Firehouse renovations transformed a long-abandoned building into a beautiful, functional and inspiring cultural and performance space for ZUMIX programs, participants and the East Boston community at large. All along, our goal was to renovate this building with the latest “green” technology.  This way, we would not only save a historic building and improve our neighborhood, but we would also contribute to a healthier environment, create educational opportunities for our youth, and strengthen our financial sustainability by saving energy costs and attracting funders who support “green” organizations. The Firehouse received Gold LEED Certification, an impressive accomplishment for a renovation project. 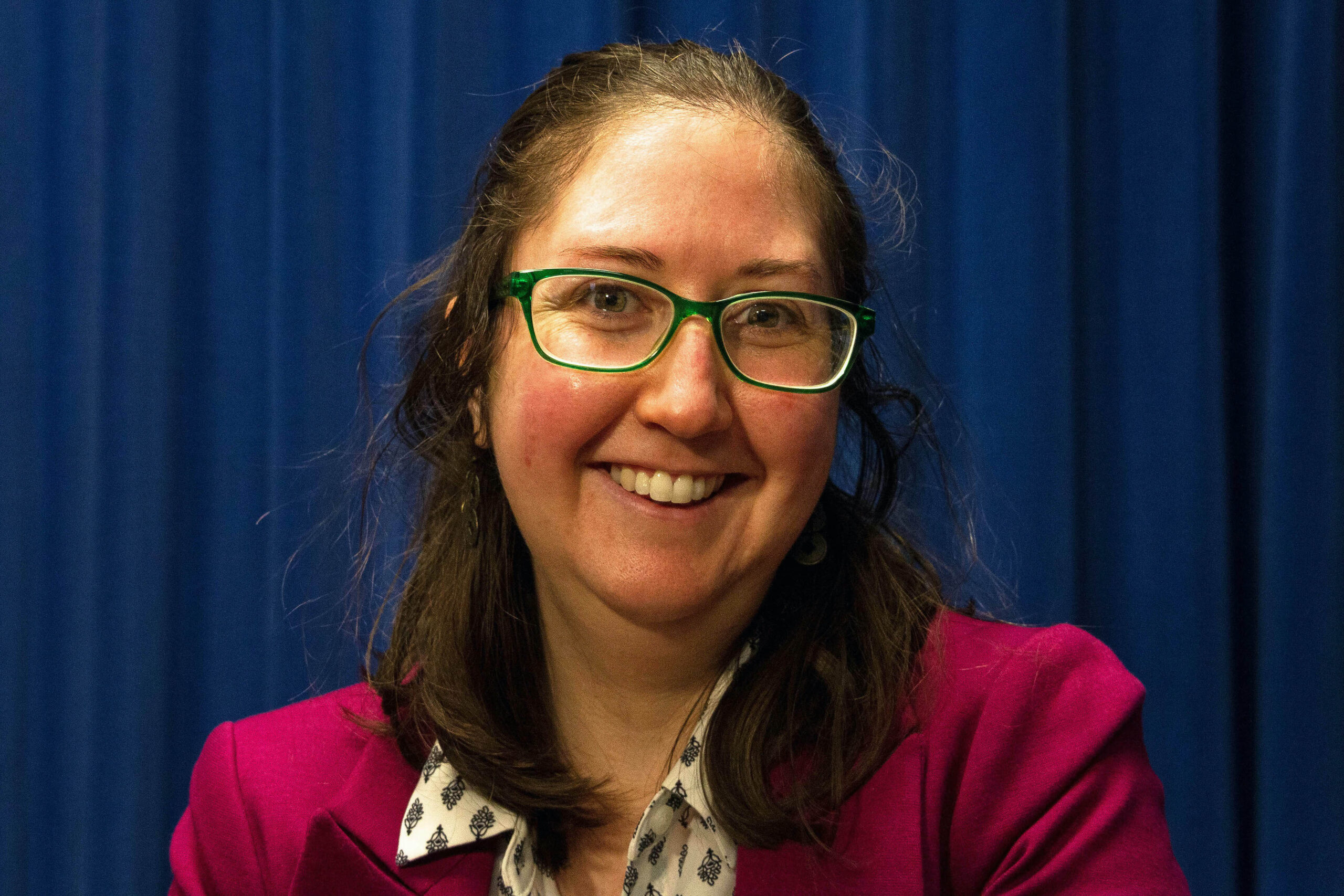 Esther Austin
Director of Development
Esther joined the ZUMIX community in April 2022. Music was at the center of her childhood, and she taught herself multiple instruments. Esther received her MA in International Relations and International Communications from Boston University in 2016. She was a teacher in Ethiopia with the Peace Corps and an ESL teacher in Boston's Chinatown.  Since moving back to the U.S., she has been working in fundraising in the nonprofit and higher education sector. She is thrilled at the chance to merge her love for music, education and fundraising. 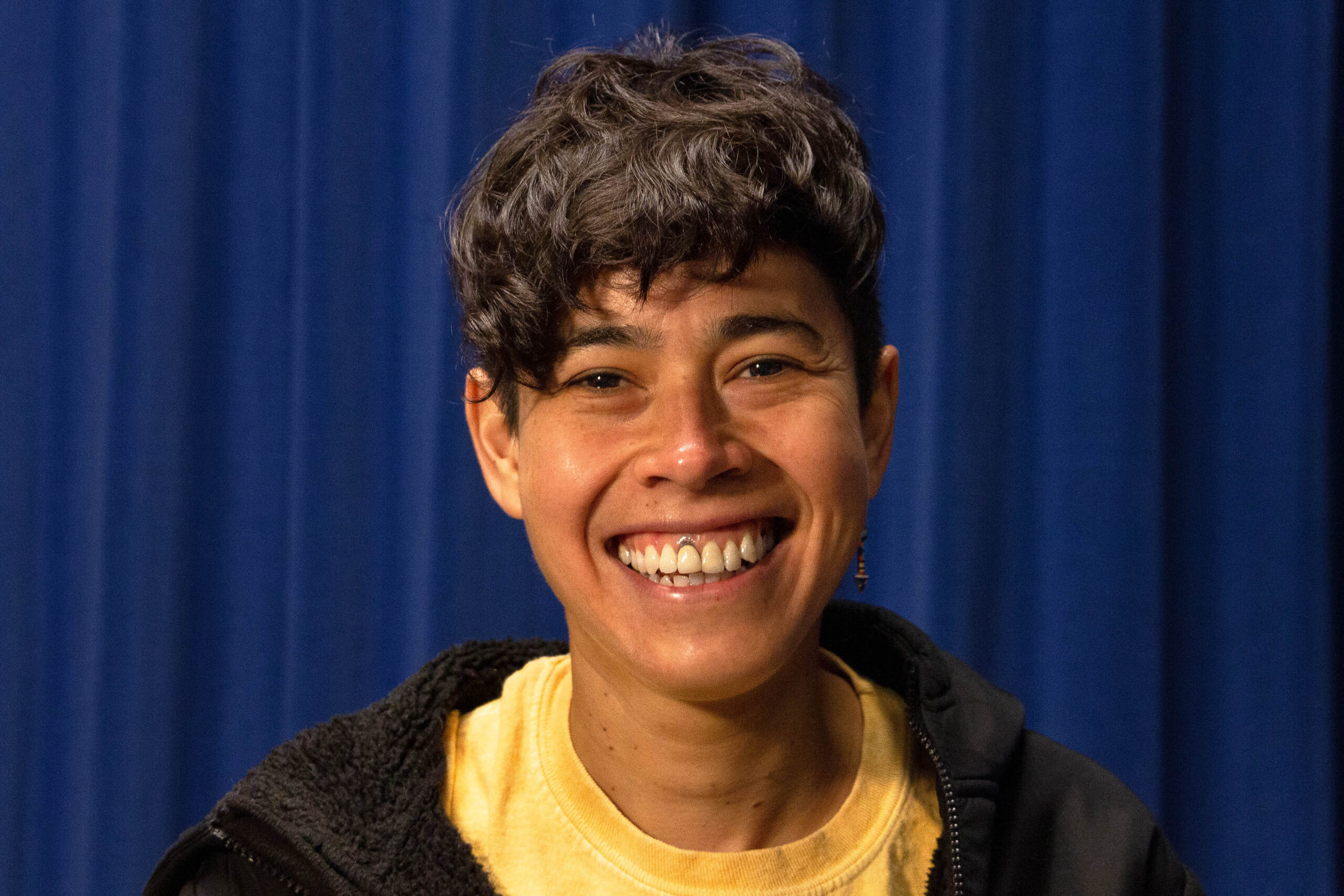 Reynaliz Herrera
Drum Instructor
Reynaliz Herrera is a Mexican-born percussionist, composer and educator. She began pursuing music at the Escuela Superior de Musica y Danza (Mexico), and graduated from The University of Ottawa (BMUS) and The Boston Conservatory (Master of Music). Reynaliz has performed in the U.S., Mexico, Cuba, Canada, Spain, Italy and Germany. In 2012, Reynaliz created and founded “Ideas, Not Theories,” a theatrical percussion company featuring her own musical works and programs. She has performed “Ideas, Not Theories” at festivals and venues in the U.S., Mexico and Canada, including The International Festival of Arts & Ideas (CT), The Institute of Contemporary Arts Boston, The Currents New Media Festival (Santa Fe), Please Touch Museum (PA), The Flea Theater (NY), The National Arts Center of Canada, The Boston Children's Museum, Brooklyn Children's Museum, Maker Faires, NY International Fringe Festival 2015,  NYU/KoSA/HLAG Day of Percussion 2016, ILLUMINUS, Cambridge Arts River Festival, and many local festivals and venues. Reynaliz has also collaborated as a percussionist with The National Arts Center Orchestra (as a percussion soloist), Danza Contemporanea En Concierto in Mexico, and Double Edge Theater Company, Flamenco Boston, Grooversity, the band Muy Cansado, Boston Percussion Group, and Boston Opera Collaborative, among others in the U.S. She has also performed at other renowned venues like SXSW, The Palau Hall (Spain), Teatro Amadeo Roldan (Cuba), the Peabody Essex Museum, Wang Center Theatre, and the Revolutions International Theater Festival (New Mexico). Reynaliz has won competitions and awards, including Mexico’s National and State’s Youth Awards, PERCUBA International Percussion Competition in Cuba, the NACO Bursary Competition, and the MTV Latinamerica Agent of Change Award. Her recent projects have been funded by The Boston Foundation and The Somerville Arts Council.  She has also been an active percussion and music instructor in the Boston area. Reynaliz enjoys making her lessons fun, creative and productive, and is super excited to teach at ZUMIX! 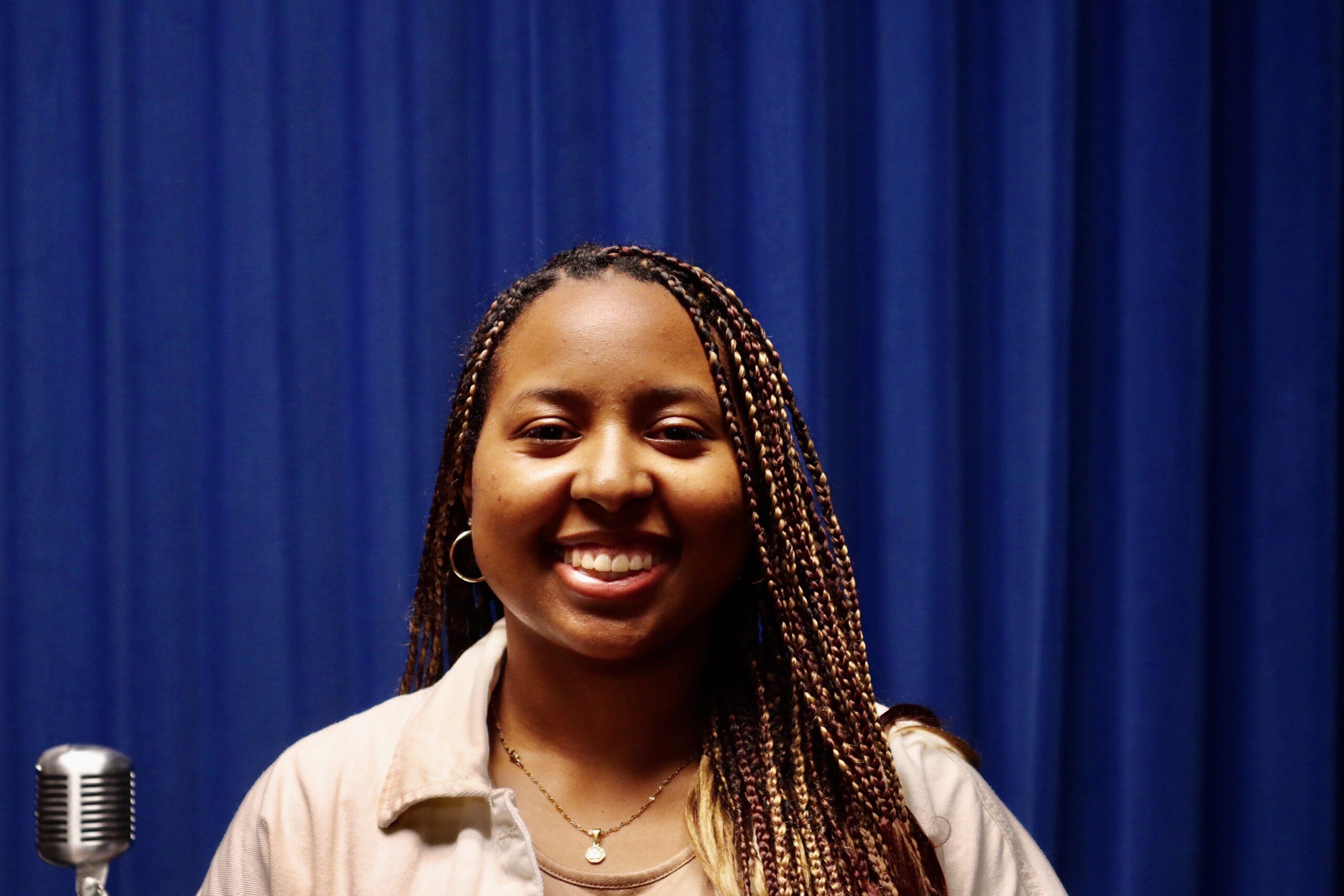 Alliyah Cuevas
Program Admin Coordinator
Alliyah joined ZUMIX at age 11 in 2014, through a dance program called Con La Corriente. She returned in 2020, when she became a member of the ZUMIX Teen Council and participant turned co-facilitator of Z Black Box. Later on, she found joy in radio programming as a Live On Air! Participant and served as the summer 2022 ZUMIX Radio Intern. Alliyah credits her time in ZUMIX’s programs for expanding her creative skill set and leadership qualities. She believes that the arts are a powerful tool, especially when used to ask meaningful questions and give platforms to underrepresented people and their stories. Alliyah is currently pursuing a bachelor's degree and hopes to combine her passion for the arts and mental health in the future.

Get the scoop on what’s going on at ZUMIX and be the first to hear about upcoming events! Sign up for our newsletter here!